It’s been a while since I posted.  My family and I moved to a new home and we’ve been busy settling in.  The new place has ~10 acres of property, so there is an unlimited list of outside projects scratching the ‘maker’ itch! And since it’s summer, they are a great way to spend time outside getting some fresh air with the kids.

One of the things that we are excited about is being able to keep a few chickens for fresh eggs. In fact, we ordered chicks and expect them to arrive this week!

We plan to use some sort of mobile coop during the warm months, but for the Wisconsin winter I decided to build something a little heavier and hopefully more suitable to the winter. Below are a series of pictures of the build so far… 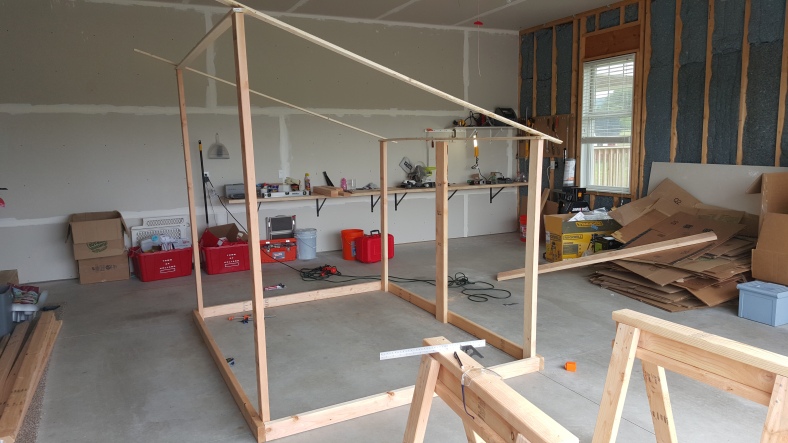 Very early framing done. The beams on top are just balanced in place so we could get a visual of what it might look like 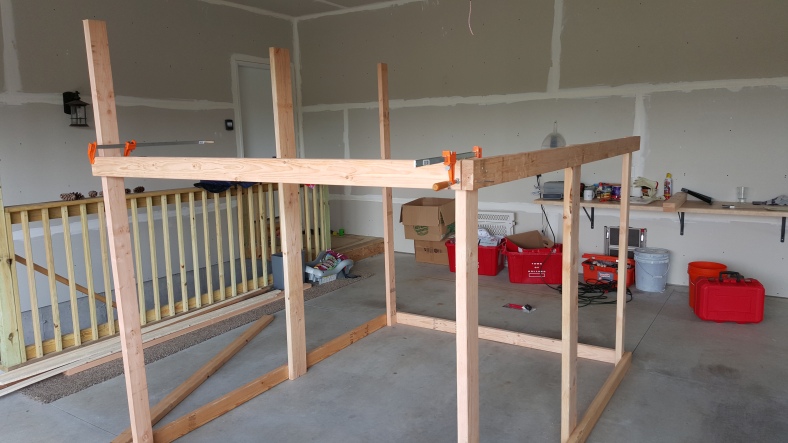 Some more framing in the garage 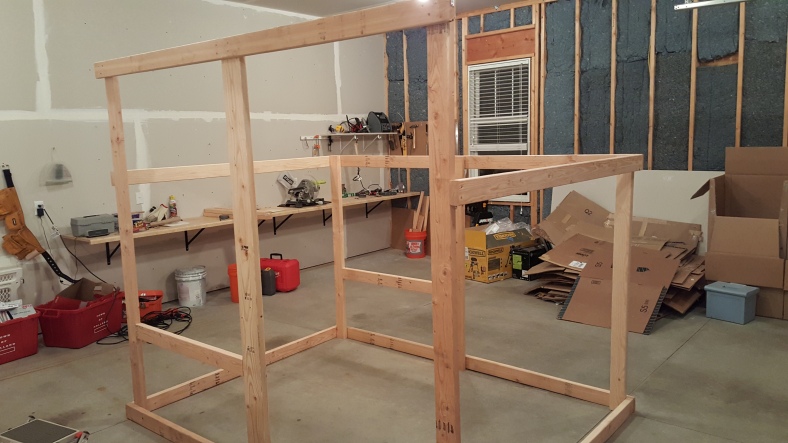 More framing in the garage. At this point it was starting to get heavy enough that I was worried about being able to move it outside! 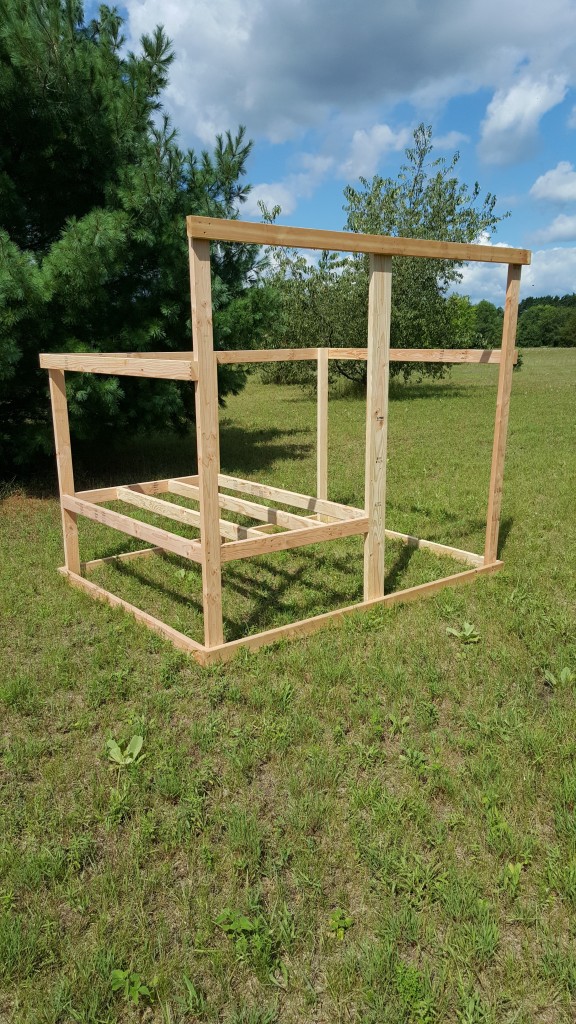 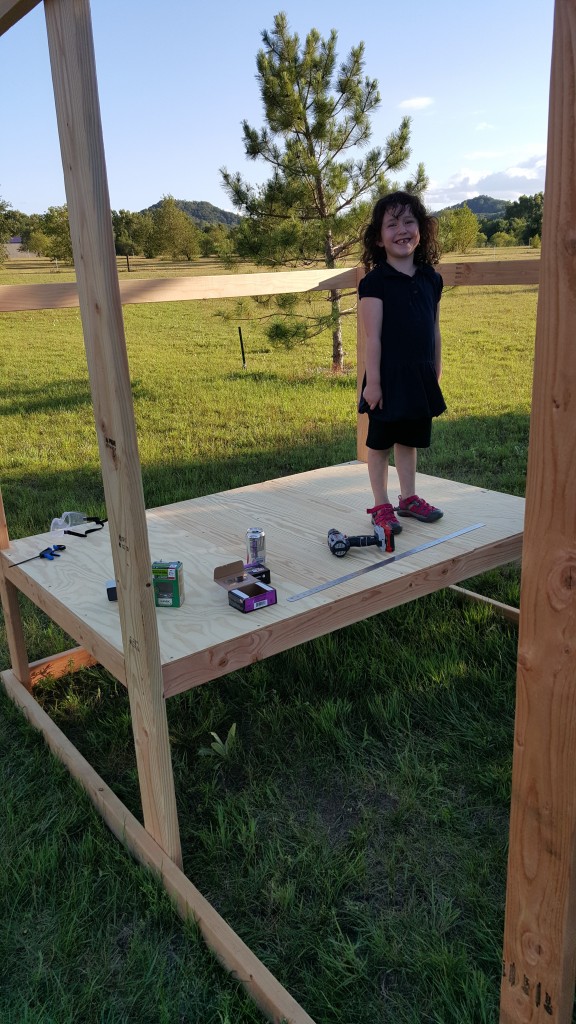 Added the flooring. The child was happy to have something to climb on. 🙂 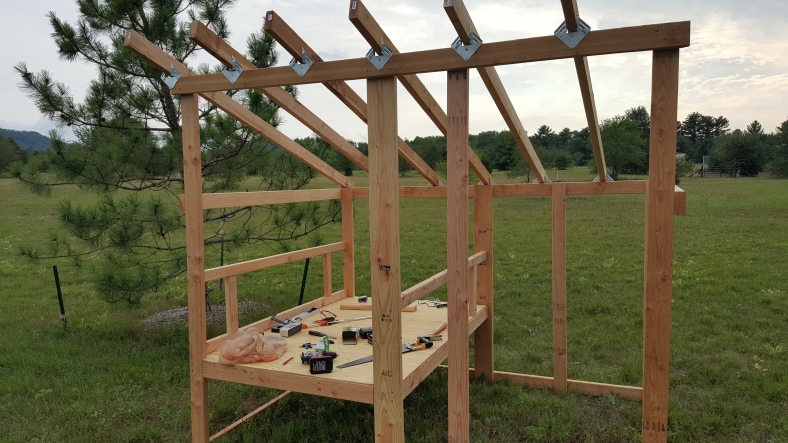 Framed the nesting box door, chicken door, put in most of the roof beams 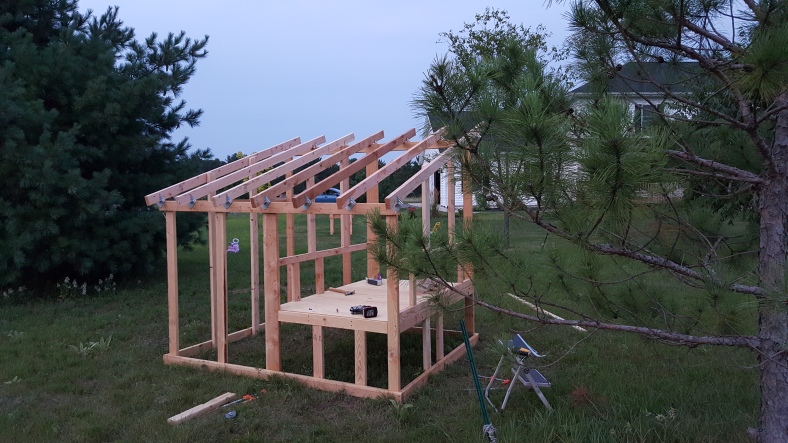 Here’s the framing from the back 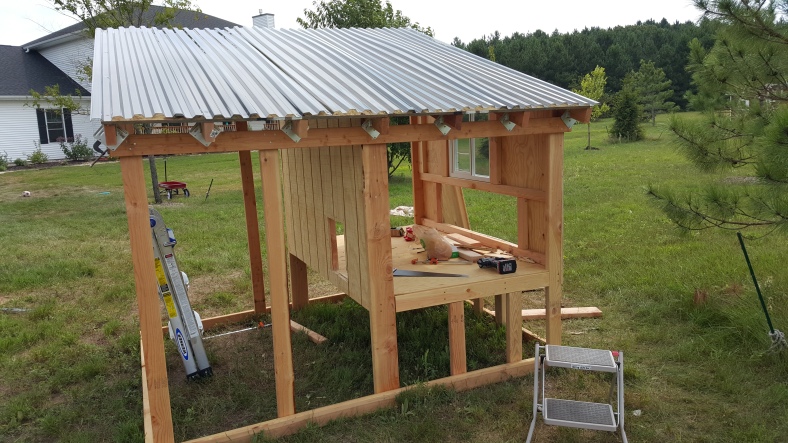 Didn’t take any photos for a few steps. Here you can see we got the roof on, and the siding on the enclosure walls as well. 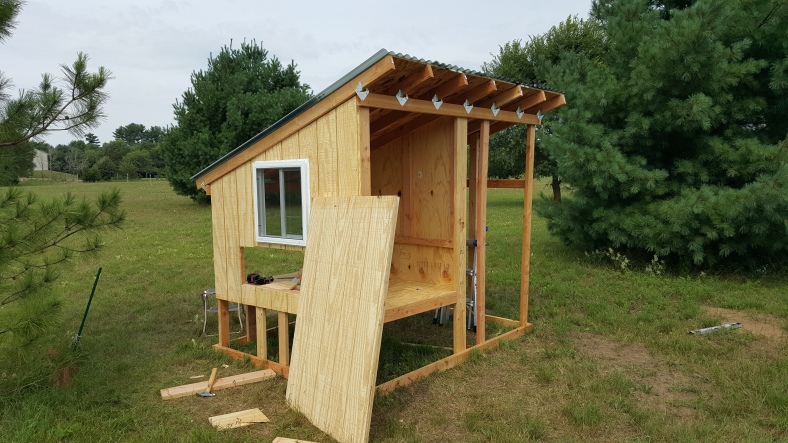 Here you can see the window added, and what will be the front door ready to go. The front and back walls will both be on hinges so the whole thing can open up for cleaning, repairs, and whatever else is needed! 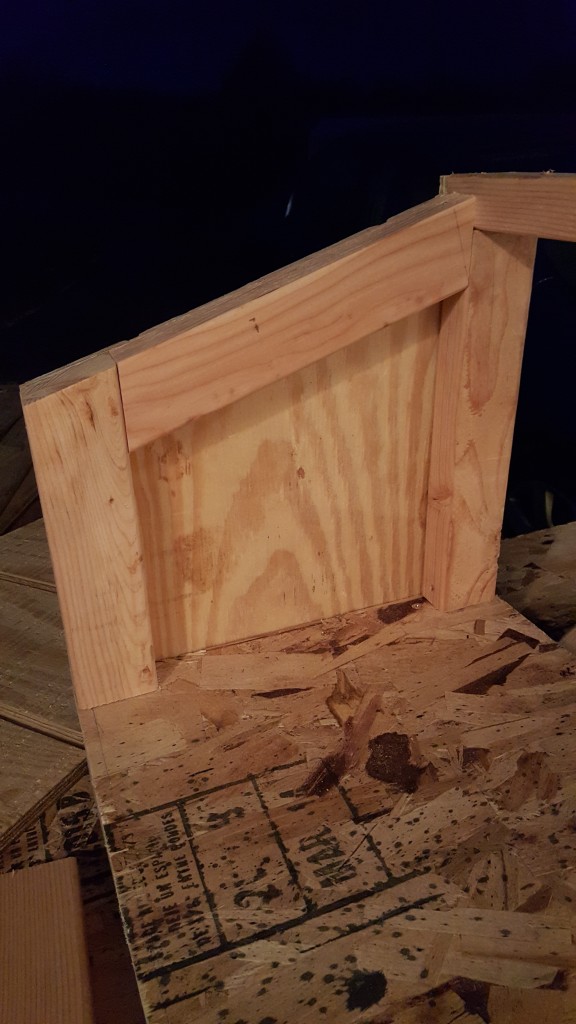 Started building the nesting box. These side cuts were tricky for an amateur like me! 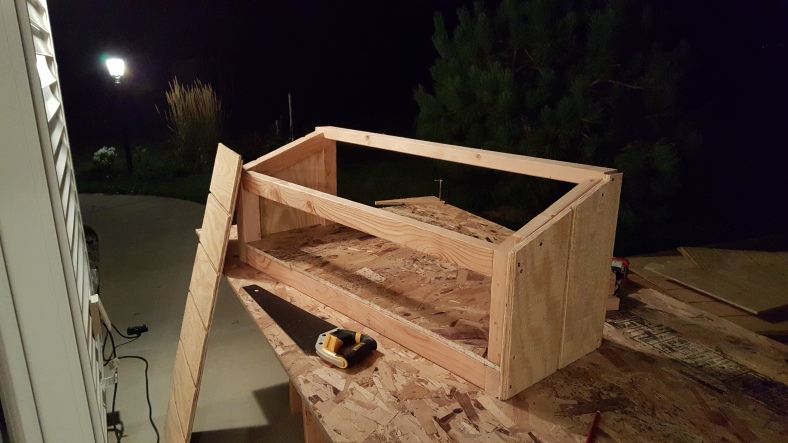 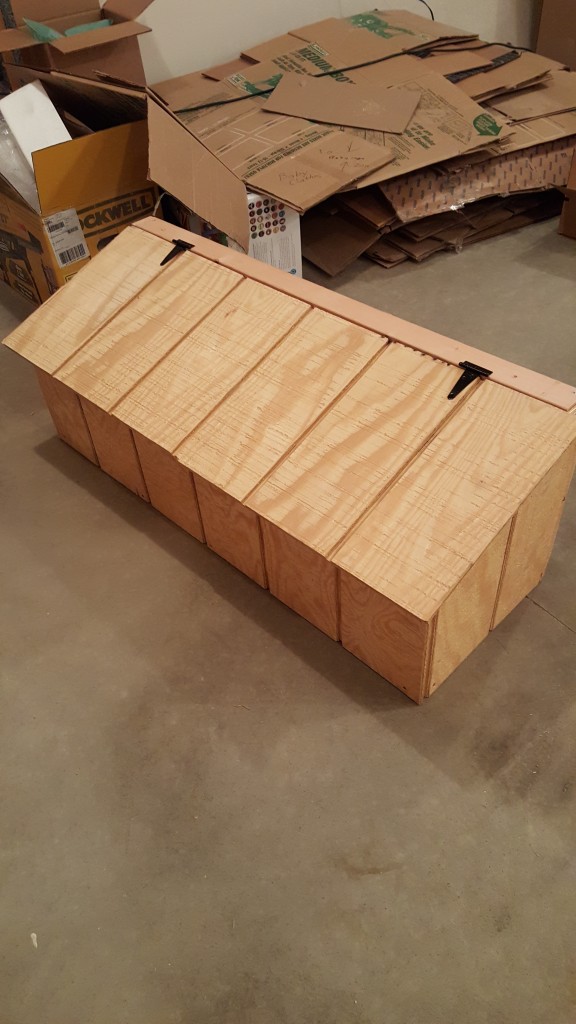 Hey, that turned out ok! 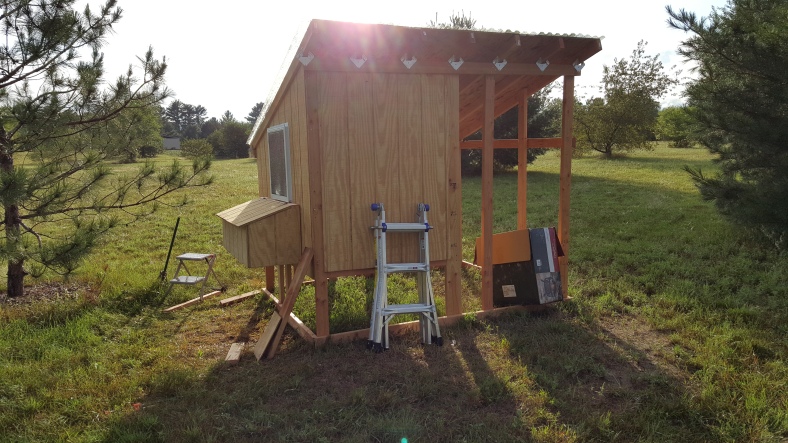 Nesting box attached to the side of the coop. Also, the front wall is screwed in place (hinges to come soon). 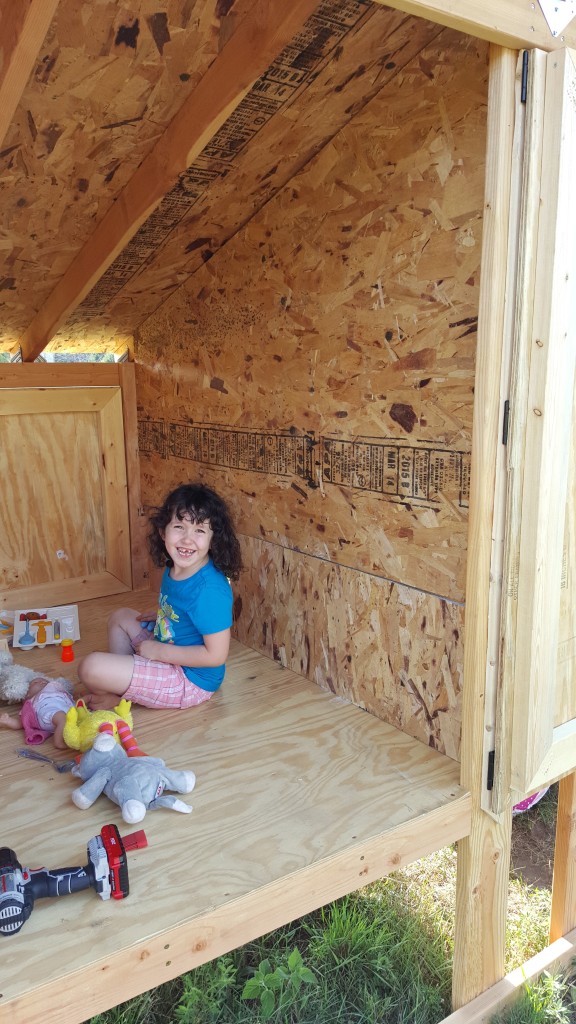 Added in some insulation and walls. I’m told that chicken coops are pretty fun to play in! 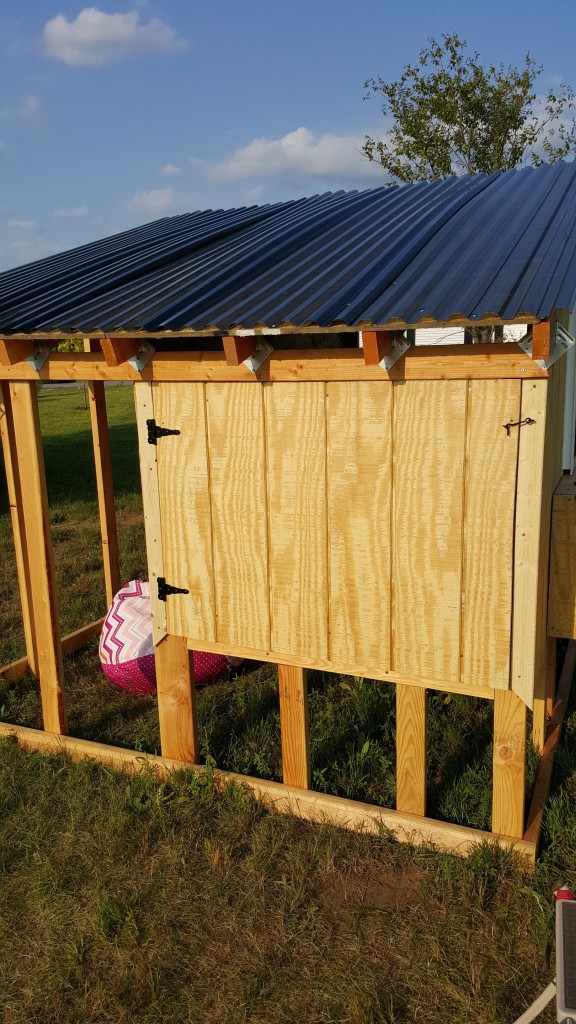 Got the back door built and hinged on. The hook will be replaced by a latch soon! 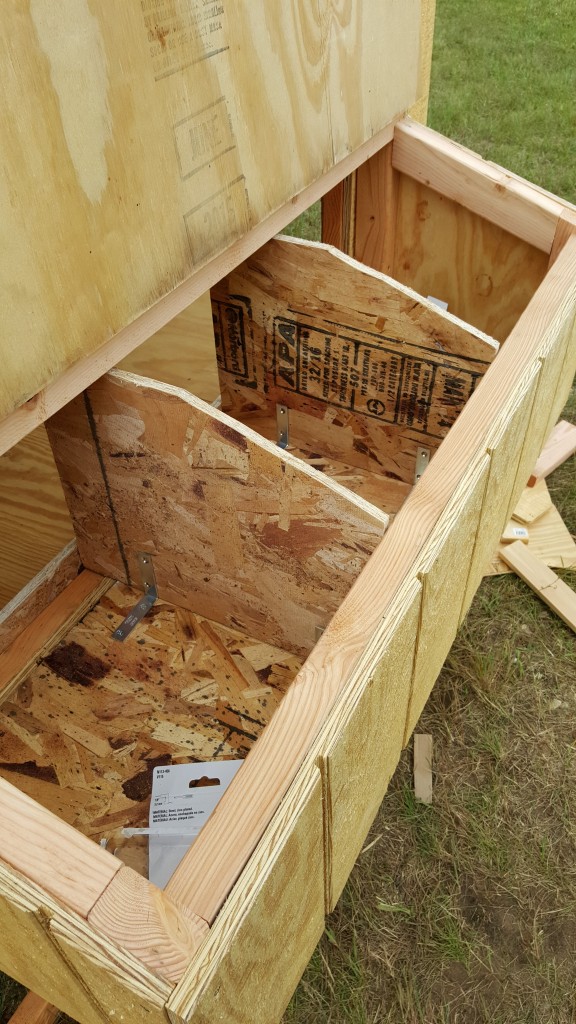 Put in some dividers for the nesting box. Smartest thing I did here was to make the pattern with some cardboard first, and then cut out the plywood. 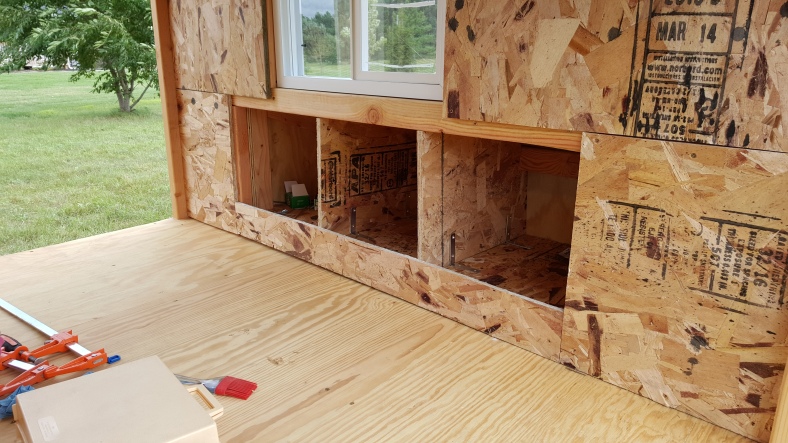 Here’s the view of the nesting boxes from where the chickens will be. I hope these look cozy enough… 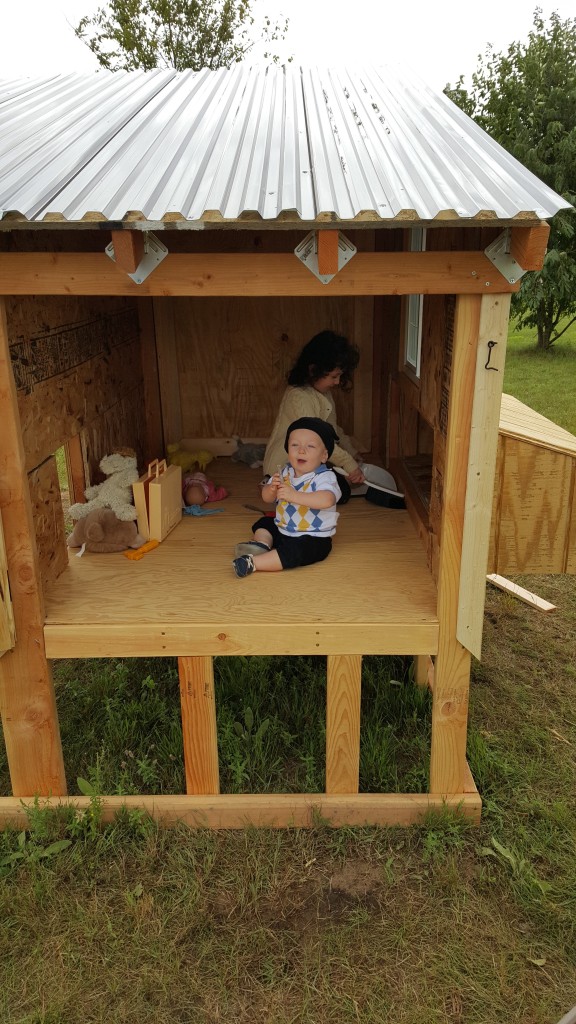 Kids still think the coop should be for them! 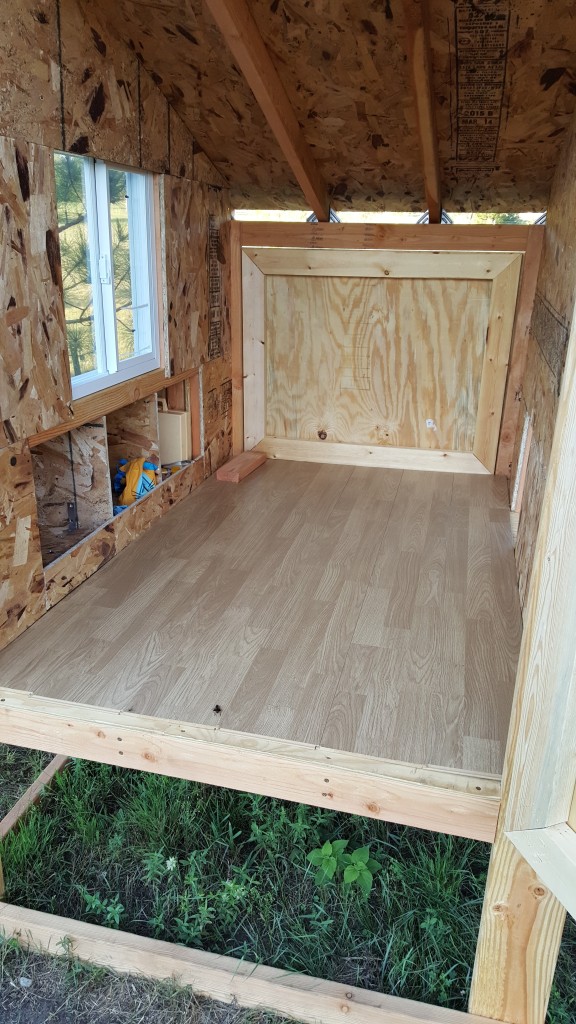 Found some very inexpensive laminate flooring and decided to use that for the floor. Hopefully that makes it a little easier to clean out?

Ok, that’s all for now.  We keep chipping away at it every day, but there is still a ton to do!  The chicks should arrive in the next few days, but thankfully we have a few weeks to finish up before the chicks move out of the garage.